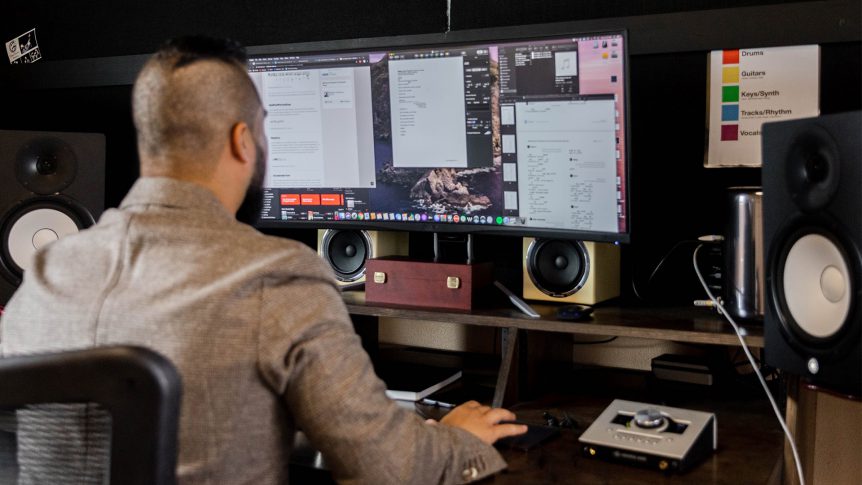 In the day and age we live in, we see the big music labels now taking a back seat to the Artists, Producers and Song Writers initiative to go on their own without the Record Label. This is mainly due to how the once complicated and costly Studio Recording Rooms with all of its complicated analog hardware and systems now being digitalized for a fraction of the cost. Signing to a Record Label is not a bad thing as there is some incentive to being a part of one, however you will most likely forfeit a portion of your rights and/or royalties to them especially for a professional band to start out for the first 1 to 4 years.

Building your own studio and learning the software will cost you roughly the same as if you record 2 songs with a full professional band after booking a top studio and have it mixed and mastered by an expert engineer for a total cost between $6,000 – $10,000.

Small Disclaimer: We are not endorsed by any particular company or product listed below.

In order to even record, you must have a Digital Audio Workstation (DAW). The best DAW is going to be the one you find most user-friendly to you. Of the 25 most common commercial DAWs out there, we chose Logic Pro X by Apple which costs $199.99 with free upgrades as they offer them. It comes with a large library of samples and a good set of plug-ins for any start up studio. I suggest taking advantage of any free trials if they are available before committing to one to find the right recording software for you and your team.

The next step is choosing your hardware and digital equipment. This is where the options are as the sky is the limit. The following is a list of what what we purchased in 2016 associated with the cost per item. With this set up, we recorded, mixed and mastered 16 songs with HungryGen Worship from 2016 – 2017. For those with a smaller budget, this set up will be a great startup.

Please note that “plug-ins” are mainly a preference and range widely in price. My recommendation would be checking other producers with the same genre direction or music feel. Keep in mind that when starting out, that some plug-ins and effects are included, depending on which DAW you choose, so try checking out those first and becoming familiar with a few before spending the money.

As we progressed over the next 2 years the budget was a little more flexible and we were able to make upgrades to the studio equipment alongside a few more digital add ons.

Interface (Replaced the 2i2 Focusrite)

Pop Filter (replaced the previous one)

Plug Ins (in addition to the previous)

We hope this will help you and your church. We are praying for your church and teams.