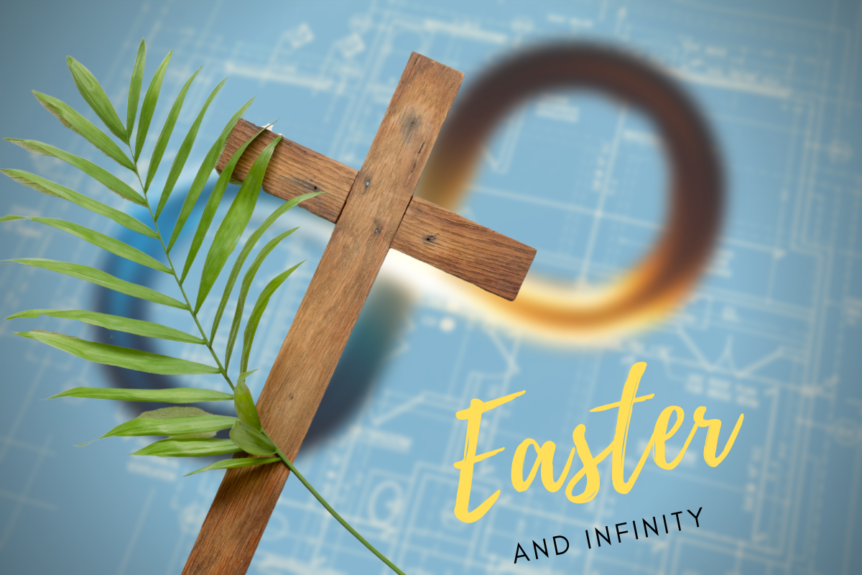 It’s Good Friday as I write this, and if you don’t know Jesus personally, you might wonder what is so good about the crucifixion and death of Jesus on the cross? After all, an innocent guy was killed on this day 2,000 or so years ago by a huge miscarriage of justice. What could be good about that?

A lot as it turns out. But I want to take a roundabout path to get there.

I was just reading a paper about Gödel’s Incompleteness Theorems (and before you drop this article right here, please hear me out… I promise it won’t be too painful) and thinking about infinity. Kurt Gödel, a Jewish mathematician living in German-occupied Austria right around the time of World War II, lived in a society where people believed that mathematics and science could answer all problems, eventually (sound familiar?). One of his famous mathematician contemporaries, David Hilbert had advanced the idea that all problems would eventually give way to the infinite and unstoppable power of mathematics and human knowledge.

Hilbert spent his life solving problems that no one thought could be solved. He lived at a time when science and industry were just beginning to show the great promise of a better life for mankind. He hated ignorance and in the Latin maxim: “Ignoramus et ignorabimus,” which means, “We do not know, we shall not know.”

In direct defiance of this, at the 1930 annual meeting of the Society of German Scientists and Physicians, Hilbert expressed his confidence in the power of human knowledge, by saying, “Wir müssen wissen. Wir werden wissen.” In English this means, “We must know. We shall know.”

Even simple systems such as arithmetic can express truths that are impossible to prove. Click To Tweet

In truth, mathematics was in a state of war. There were those on the side of the ancient and humble wisdom of the Romans who were saying that absolute knowledge is absolutely impossible. Others like Hilbert’s friend and famous mathematician and atheist, Bertrand Russell were writing huge volumes like the Principia Mathematica, which was essentially 30,000 tons of intellectual concrete poured into the crevices of doubt that were appearing as our knowledge increased.

Only the day before Hilbert made his famous hopeful pronouncement, Kurt Gödel had announced the first expression of his incompleteness theorems, which show that even simple systems such as arithmetic can express truths that are impossible to prove. Either that, or they are fundamentally flawed. Gödel was restating, in the precise mathematical language that Hilbert knew and loved, exactly the wise sentiment of “Ignoramus et ignorabimus.” We cannot know for certain the absolute truth of even the simplest mathematical expressions like 2+2=4.

Sadly, just a few years after Hilbert’s remarks, the very nation he spoke to plunged the world into what people soon called, “the war to end all wars,’ World War II. It turns out human knowledge is not the answer. It cannot bring the peace and prosperity everyone was expecting from it. Gödel was closer to the truth, there are some things we can never know. Just when we think we have all the answers one more inconvenient fact comes along and lets all the air out of our tidy little universe. Science cannot solve all our problems. We can’t even prove that the answers that work so well for us are true.

The problem is incompleteness. All science depends for its truth on things that we assume that are outside science itself. Even if we include those assumptions in our set of starting beliefs other unprovables will show up again and again. We are finite creatures, and Gödel’s mathematical genius had just shown the world that with all our knowledge we still cannot be certain of anything we know.

As I sit here, I’m quite full from having eaten supper. But in a few hours, I’ll be hungry again. I got a great sleep last night, but before long, I’ll need to close my eyes and rest again. Just a few hours ago, I had a very sweet and encouraging conversation with some friends I love dearly. But even though I deeply enjoyed the warmth of their love, it turns out I have this hole in my heart, and I’m going to need more love again soon.

Even if I have the most loving family and friends in the world, if I go to them to get my love, I could eventually suck them dry and still not stay full for long. Blaise Pascal said it best:

“What else does this craving, and this helplessness, proclaim but that there was once in man a true happiness, of which all that now remains is the empty print and trace? This he tries in vain to fill with everything around him, seeking in things that are not there the help he cannot find in those that are, though none can help, since this infinite abyss can be filled only with an infinite and immutable object; in other words by God himself”

There is this God-shaped vacuum in all of us. Worse than that, our finite hearts are leaky. We cannot be filled by anything else but God! But how can we fit the infinite into our finite hearts? Consider a common ruler as an illustration:

Jesus was something like this for us. Somehow, God crammed all His infinitude into a tiny baby boy conceived by a poor unmarried mother in Roman occupied Judea two thousand years ago. And nearly 2,000 years ago that same infinity fit between the outstretched arms of a man who hung dying on the cross. The infinity of God’s love dripped out our forgiveness in a red stream as He died. At the very end of His earthly life, Jesus cried out, “It is finished!” as the infinite riches poured out in His death paid the cost for every sin for every person for all time. This is what we celebrate on Good Friday. My sin was terrible, but it wasn’t infinite like Jesus’ sacrifice. He paid it all!

But the Good News gets even better! Even though in my finite humanness I am constantly leaking my life away, Jesus was God Himself. He could never stay empty because the life and power of God was flowing into Him. Just three days in the grave and God’s life and power resurrected Him from the dead on that first Easter Sunday!

This is what we celebrate on Good Friday. My sin was terrible, but it wasn’t infinite like Jesus’ sacrifice. He paid it all!  Click To Tweet

And it gets better still: the life in Jesus’ blood now flows into me and everyone who receives His sacrifice. We need never be empty again. Governments may fail us. Friends may desert. Families may misunderstand us. We can’t rely on other humans at all. But if today we can bring ourselves to the humble realization the answer doesn’t lie in our loved ones or our science or ourselves we can find the true Source that fills all our needs.

Have you given your heart to Jesus? It will cost you everything, but it turns out we’re not that big; we don’t have that much to give. However, in exchange we get God’s infinite supply of everything we ever needed. And that is what I call Good News!

If you liked this article, you will find more like it in my forthcoming book, The Gospel, God’s Great Undoing. Preorder here: https://finkga.kartra.com/page/UndoingBook