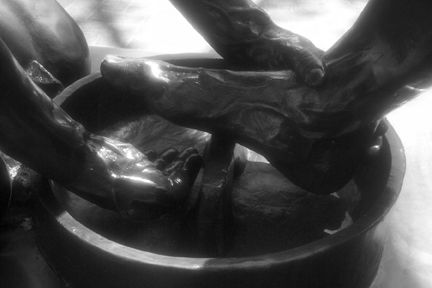 Before the Passover Festival, Jesus knew that his hour had come to depart from this world to the Father. Having loved his own who were in the world, he loved them to the end… 3 Jesus knew that the Father had given everything into his hands, that he had come from God, and that he was going back to God.

Jesus wasn’t some wild haired radical who tried to fix the world but eventually upset the wrong people and got himself killed. Instead, he was acting deliberately out of love and the full knowledge that he had ultimately won. He knew about his betrayer, yet he called him “friend.” He knew his closest friends would run for their lives and abandon him, yet he loved them to the end. He knew he was about to lose everything from the shirt off his back to the blood in his veins, yet he served with the utter confidence that he owned and ruled everything.

His radical faith in God enabled him to act in radical love. He had nothing to prove, no one to please, and nothing to fear. Perfect love casts out fear, and Jesus was able to walk in love because of his utter confidence in the Father’s promise. As bad as it was going to get, he didn’t panic, didn’t bolt, didn’t tap out. He followed through to the end. Because, after all, he knew death was only the beginning.

Jesus owned everything even before he created this pale blue ball spinning in the vast empty cosmos. Then he gave the world to us as his delegates on earth. And at the first opportunity, we gave it all away to the devil because we thought there was a shortcut to getting godlike knowledge and powers without all the trouble of having a relationship with God. Instead of destroying us right there and then, God had already decided in advance that he would simply use our betrayal to show the universe what a true love relationship is. His sacrifice was a demonstration of love to those who would receive him and a show of truth to those who refused him.

When he came, Jesus divested himself of everything and took on the weakness of human flesh so he could take back the only thing God had ever lost‚ his beloved human race. He took it back, not by force, but by paying the full price, personally. After everything he’d already lost to come here, he chose to lose the humanity he’d gained by laying it all down in the grave. But he did it knowing that once he paid that terrible price he would once again re-inherit it all‚ not just heaven but earth and humankind too.

So he laid it all down, confidently picking up a towel and washing the feet of his fickle disciples. Then he put that down and took up a cross, and with it all the sins and guilt of all mankind forever. Then he laid that down in his grave forever to pick up eternal life and glory, not as God, but as the God-man. Then the man, Jesus, shared everything he had won with every one of us who will simply put down our own pride and say, ‚”yes, I needed that.”

It is said that there is no selfishness in love and no love exists in selfishness. There is also no fear in love, only the knowledge that ultimately, a true lover can never lose. We just have to lay it all down all of it, take up our own crosses, and follow Jesus into death‚ and life.