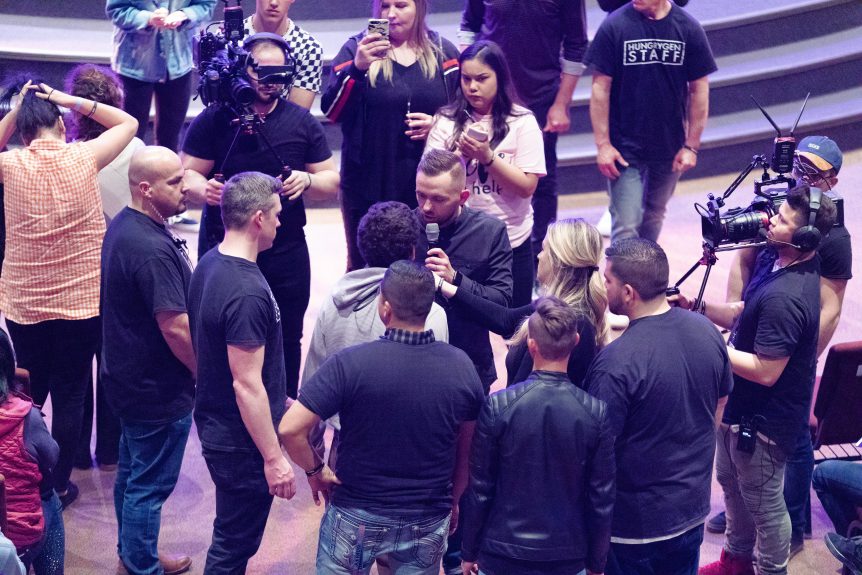 Is it okay to talk to demons? Why do your pastors ask demons questions during deliverance? These are a couple questions we get regularly.

There are a few things we must keep in mind. In the Bible, we are commanded to cast out demons – that requires speaking. To be clear, we are NOT encouraged to have conversations with demons. During deliverance, at times we ask questions like, “Who are you?” “What have you done to this person?” “How did you enter this person?” These are not conversational questions, these are interrogational questions.

Some have claimed that doing public deliverance and interrogating a demon glorifies the devil and embarrasses the person. On the contrary, we have found that deliverance embarrasses the devil, builds people’s faith, and instills God’s fear in this new generation. Jesus refused to exclude deliverances from any of the Gospels, nor did He perform them in private. He did not do them for show, but to glorify God and bring help to those who were struggling.

With that being said, here are a few of the reasons for interrogating demons as we, and quite a few other people who do deliverance, do.

1. Jesus did it. Mark 5:8-9 For He said to him, “Come out of the man, unclean spirit!” Then He asked him, “What is your name?” Jesus told the demon to come out of a man and then asked the question, “Who are you?” The demon answered. The demon’s answer didn’t indicate that it lied about the information.

This is the only mention of Jesus doing that, but with the amount of deliverances Jesus did, I am certain that it’s not the only time it happened. Even if it did happen only once, His example in no way prohibits us from doing it.

2.If a demon obeys and responds to you about its name, then it acknowledges your authority as a follower of Christ. Acts 19:15 “And the evil spirit answered and said, “Jesus I know, and Paul I know; but who are you?”

The sons of Sceva tried to follow Paul’s pattern of casting out demons without being born again and being filled with Holy Spirit. The demons responded that they didn’t have any respect for them, and injured those guys because they didn’t know what they were doing.

I have seen many times during deliverance where demons have said things like, “You can’t cast me out,” “You’re too small,” “You don’t have enough anointing,” “This person is mine,” or, “They belong to me.” It’s similar to when Goliath tried to intimidate David by calling him a little boy. All these are the devil’s attempt to throw us out of our confidence in Jesus. We don’t cast out demons by our power, but by the power of Jesus’ name and Holy Spirit’s anointing.

3.If you ask the right questions, demons reveal other demons. Mark 5:9 “Then He asked him, ‘What is your name?’ And he answered, saying, ‘My name is Legion; for we are many.’”

At times, there are other demons that are hiding and interrogation helps us to expose and expel them. We must not rely on information from demons, but revelation from Holy Spirit. His gift of discernment of spirits is available to us when we are doing deliverance. But at times, we can do what Jesus did, and command the demon to reveal their name, number, and nature.

5.When demonic plans are revealed, people are warned. For example, God told Gideon to go to the enemy’s camp and listen to what they were saying. God’s Word should have been enough for Gideon, but God wanted Gideon to hear the same message from his enemy. We are always telling our youth, “Stay away from sin, honor your parents, and walk close to the Lord,” but some refuse to heed these words.

However, when they witness deliverances, they see how demons take advantage of people who live in sin, and this brings the fear of God into them. We do not need the devil to know that prayer is powerful; however, it does bring satisfaction to hear demons scream that prayer is like fire against them. This lets us know that praying and fasting are powerful weapons against the kingdom of darkness, and sin is a wide open door for demons.