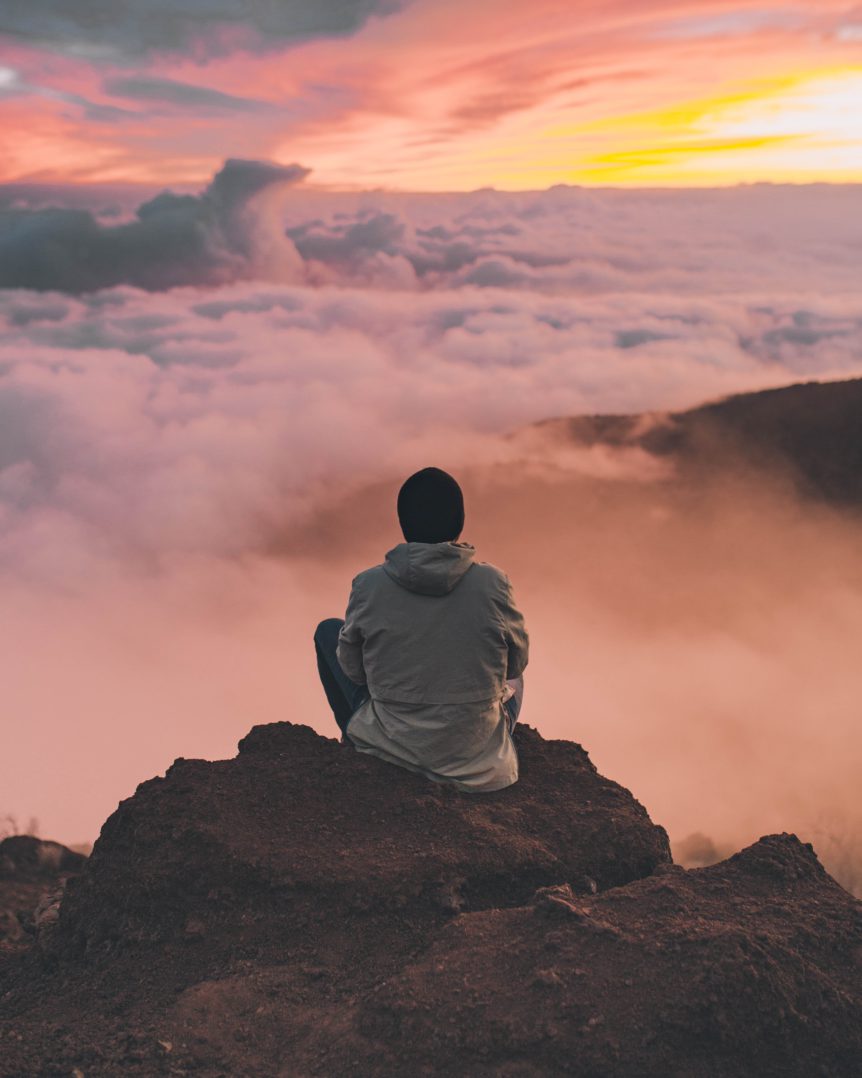 Pharoah was pursuing the terrified children of Israel into the wilderness. They ran right up against the Red Sea and had nowhere else to turn.

But Moses said to the people, “Don’t be afraid. Stand firm and see the Lord’s salvation that he will accomplish for you today; for the Egyptians you see today, you will never see again. The Lord will fight for you, and you must be quiet.”

The Israelites thought they had no power. This verse is often quoted by Christians to illustrate our utter dependence on God; Moses tells the panicked Israelites that their part is to be still and let God do His thing. But the interesting thing is how God contradicts Moses in the very next verse:

The Lord said to Moses, “Why are you crying out to me? Tell the Israelites to break camp. As for you, lift up your staff, stretch out your hand over the sea, and divide it so that the Israelites can go through the sea on dry ground.

God evidently disagrees with this passive stance because He immediately contradicts Moses and says (essentially), “Don’t come crying to Me, and don’t tell the people to stay still. Get them going! And you, take the staff of God I’ve given you and divide the water!” We can certainly sympathize with Moses here, but it turns out that his passive stance of just waiting for the Lord is wrong. God has bigger plans than we can often imagine, but we have to trust Him and go forward, even when it looks impossible. He has given us the power to make a way as we act on our faith in Him.

A weak Christianity is ever inclined to whine in prayer while God waits for the believer to command it.

Moses thought he was being faithful by waiting for God. But the responsibility was not with God: it was with Moses. God is teaching us to be about His business. He is not looking for helplessness and false humility. He has no interest in excuses. He wants us to act on His behalf with His power. God has bigger plans than we can often imagine, but we have to trust Him and go forward, even when it looks impossible.

John G. Lake grew up with a powerless theology. He watched his grown brothers and sisters die around him as a young adult. His family was beset with a curse of disease. Then his beloved wife got sick and drew near to death. In her final hours, a minister friend of his, seeking to relieve his obvious pain said, “Be reconciled to let your wife die.” But Lake thought of his children and his love for his wife. He realized that God loved her and them more than even he did. With such passion in his heart, he felt that just letting her go would be an insult to God Himself!

He returned home, picked up his Bible and threw it on the table. It opened miraculously to Acts 10:38, which reads:

God anointed Jesus of Nazareth with the Holy Ghost and with power: who went about doing good, and healing all that were oppressed of the devil; for God was with him.

Suddenly he realized that sickness was oppression by the devil—not God. God is not the author of sickness—the devil is!

Suddenly he found himself on fire with faith and hope. He finally understood the ministry of Jesus on a deep level as never before. When Jesus healed the sick, He was doing His Father’s will, and in doing so He was destroying the works of the devil (1 John 3:8, Heb. 2:14)!

Lake said out loud, “this work of the devil shall cease, for Christ died and Himself took our infirmities and bore our sicknesses.”

He telephoned and telegraphed friends to arrange unified prayer for her the next morning at 9:30AM. At the prayer time he knelt by his wife’s bed as she lay mere hours from death. He called on the power of the living God, fully believing that it was His will to heal her.

As he did, the power of God came on her and immediately her paralysis left, her heartbeat became normal, her coughing stopped, her breathing became regular, and her fever went down. He kept on praying until he heard her strong, clear voice (completely unlike the weak whisper she had before) loudly say, “Praise God, I am healed!” Then she threw off the blankets and stood up, completely healed!

After this, Lake became a holy terror to all sickness and disease. People were healed by tens of thousands. He went to Africa where a plague was raging, and he helped stack up dead bodies while healing the sick. Doctors came to him, alarmed that he was not wearing any protective equipment to save him from the deadly virus, so he did a demonstration. He had them swab out the mouth of a man who had recently died and put his saliva on a microscope slide. He told them to watch the slide where all the germs were swimming around. Then, as they watched, he placed his finger on the slide—and instantly every bacterium died! His teams healed so many in Spokane, Washington that one hospital had to close down, and another nearly closed because there were not enough sick people in the city. Lake was an ordinary man, but when he realized the power of the gospel was for him, he gained extraordinary belief in the God who gave him authority and power.

Two different Greek words in the Bible are both often translated “power” in English: exousia and dunamis. Exousia actually means “authority.” For a police officer, his commission is his authority, which is symbolized by his badge. Dunamis (from which we get our word dynamite) is raw power, the ability to accomplish work. Both the police officer and the criminal might carry guns, but only the police have the authority to use the power of the weapon, and then only lawfully.

The gospel has power, but the proper use of that power must be within the authority given to us by Christ in the Great Commission and elsewhere.

Jesus . . . said to them, “All authority has been given to me in heaven and on earth. Go, therefore.”

Jesus passed His authority on to the disciples in the Great Commission and commanded them to do the same for their disciples. But it wasn’t until their encounter with Holy Spirit that they received power to exercise their authority.

Authority comes from commission. Power comes from an encounter. But how many today stop short of that encounter with Holy Spirit and settle for “good theology?” And honestly, it is not good theology, it is safe theology; theology which allows them to pretend they have no power, no authority—and therefore no responsibility.

Unfortunately for them, it is not even safe theology, although it feels safe now. But God doesn’t agree with their declarations of powerlessness. In Matthew 25:14–30, Jesus tells a story of three servants whose master went away on a trip and He doled out to them each some of His treasure to invest. Two of the servants doubled their investment, but one simply hid the money. Rather than repenting, this proud servant actually blamed the master for his inability to do anything with the master’s investment.

Do you think the master was pleased at the servant doing nothing and then claiming that it was the master’s fault that he couldn’t do what he had been told to? Did the master sympathize that the servant hadn’t been given enough money or the authority to invest it? Not at all. The master severely punished the servant who did not do his job, binding him hand and foot and throwing him into outer darkness.

Now, I am not saying that you will go to hell if you don’t heal the sick. I’m saying that if you refuse to use your power, you have no faith in your God-given authority. If you do not believe in your authority, you are doubting God’s ability to work through you. I’m not saying you will go to hell; that is not mine to say. But I will say that the excuse did not work for the wicked, lazy servant—and it will not work for us.

Sometimes we get confused between waiting on the Lord and waiting for the Lord. Click To Tweet

Sometimes we get confused between waiting on the Lord and waiting for the Lord. Yes, we are to wait on the Lord, like a waiter in a restaurant does. We are here to serve Him, and that requires action. We’re not supposed to wait around until He does something. Faith is active not passive. The Lord will fight for you, so get moving!

This article was excerpted from the forthcoming book, The Gospel: God’s Great Undoing © 2021 Dr. Glenn Fink. Look for it everywhere books are sold this Fall. See http://www.undoingbook.info for more information.